You are here: Home / About / The Brangwyn panels

Sir Frank Brangwyn, R.A. (1867 – 1956) is celebrated as one of Britain’s most prolific and versatile artists. His work is internationally acclaimed and the huge British Empire Panels in Swansea are amongst the most important examples of his decorative work on a large scale. The Hall at the Guildhall, Swansea is renowned as a major concert hall, conference and reception centre, servicing the Principality and beyond, is enhanced by these unique magnificent Brangwyn panels. 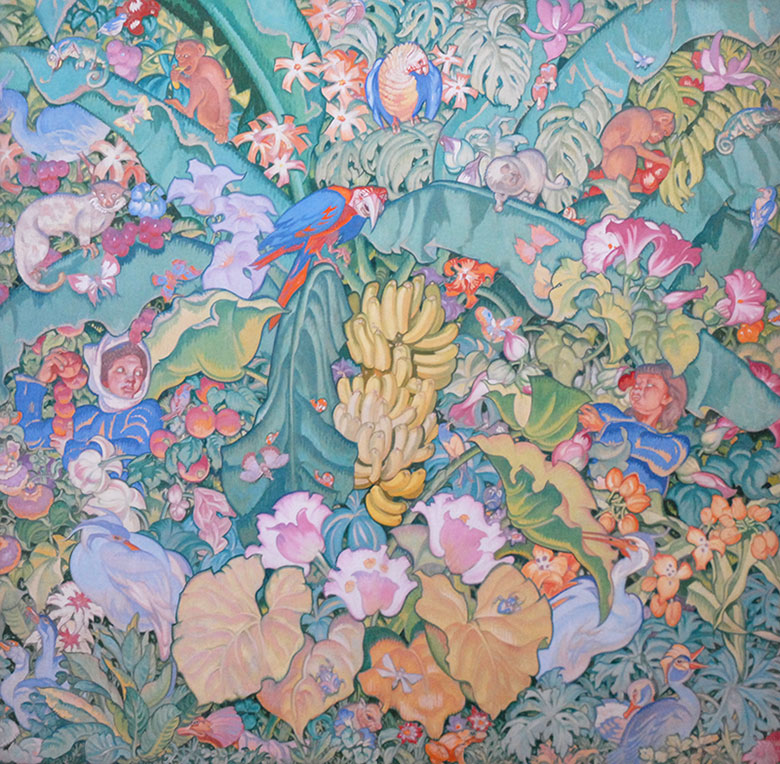 The story of the Brangwyn Panels and the various fascinating preparatory drawings coming to Swansea is one of triumph over disaster.

In 1924 the House of Lords voted to commemorate the First World War by completing the Victorian decorations (commissioned from Daniel Maclise by Prince Albert) in the Royal Gallery, Palace of Westminster, London. Lord Iveagh offered the fee of £20,000 and chose Frank Brangwyn, supported by other Lords.

Brangwyn had studied with William Morris, served as an official First World War artist, was already recognised world-wide and had been elected a full Royal Academician in 1919.

Following the death of his wife in 1924, Brangwyn’s fortunes improved when in 1925 a major show of his work was both critically and popularily received in Boston, USA and the Royal Gallery Commission was begun.

Brangwyn’s intention was to enliven the gloomy Royal Gallery with “decorative painting representing various Dominions and parts of the British Empire”. No geographical logic was intended; the panels have a spirit of fantasy showing a protected world of beauty and plenty, based artistically on Brangwyn’s many travels and also his studies of animals in London Zoo. Two assistants worked with him and chalk designs were drafted on to the squared up canvasses. The tonal variations allowed for the imbalance in lighting at the Royal Gallery.

In 1927 – 1928, two of Brangwyn’s main supporting peers for the scheme died, and in 1930 at the request of the Royal Fine Art Commission the artist had to show, somewhat reluctantly, the five finished panels in the Royal Gallery itself.

Public controversy ensued; the scheme was thought to be too colourful and lively, and was declined. Lord Iveagh’s heir honoured the original commission which was completed in 1932; the whole scheme was then shown at Olympia in a special setting at the Daily Mail Ideal Home Exhibition in 1933 – its future uncertain.

Both Cardiff and Swansea showed interest; due to Brangwyn’s considerable fame and his paternal Welsh connections. The building of the new Guildhall in Swansea, with the offered chance of raising the proposed Assembly Hall ceiling to 13.4 metres specially for the Panels, secured the scheme – the Brangwyn Hall was inaugurated along with the whole building in October 1934 by the then Duke of Kent, and visited in 1937 by Their Majesties King George VI and Queen Elizabeth.

Brangwyn was so encouraged by Swansea’s response that he gifted many related drawings and studies to the Council – a continuing source of interest to this day. Fortunate also as Brangwyn’s will decreed that all his papers should be destroyed on his death in 1956 aged 89.